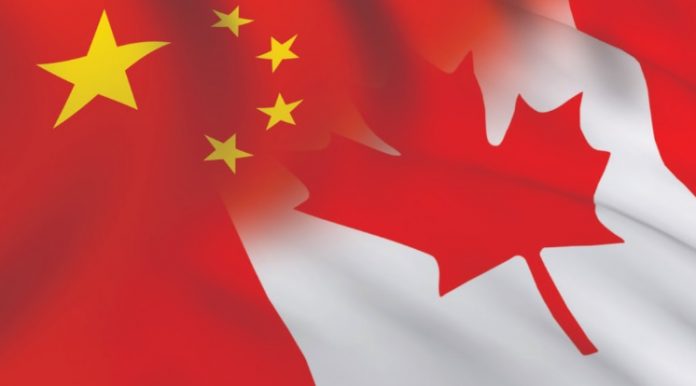 China is communist nation-state that is being radically transformed into a totalitarian technocracy via 5G, AI, and Biometric Tracking. The Government of Canada has used China as leverage against the U.S.A.

There are globalist corporate interests that are heavily invested in China, most notably the Power Corporation. This corporation run by the Desmarais family has connection through the Montreal Economic Institute (MEI) to the Atlas Network, funded by globalist Koch who has ties to globalist Soros.
Power Corporation, which supports UN Agenda 2030:

Since 1970’s the Power Corporation has had strings on every single Prime Minister, and at same time, this Corporation is deeply invested in China. For example, the Harper regime was linked to the Power Corporation via MacKay and Bernier, and Mulroney was a lawyer for the Power Corporation, and Chretien married into the Desmarais family through Aline Desmarais, daughter of Andre Desmarais. There is a revolving door between the Government of Canada, regardless of which multi-controlled opposition is in power, and corporate board rooms. This reality helps explain why the Canadian people are coming last, and things like 5G are deployed behind their backs and while in lockdown.

In 1997, CSIS released a report called Sidewinder that identified China as a national security threat through its infiltration of most sectors in Canada including government, corporate, and political. The report was squashed by the Chretien government, and things have continued as usual.

In 2014, the Harper Regime signed Canada onto the 31 year secret trade sell out to China known as Foreign Investment Promotion and Protection Agreement (FIPA), which includes secret tribunals and allows Chinese corporations to bypass Canadian laws

Currently, we are dealing with the Trudeau Regime’s connection to China via the same entrenched interests, the Power Corporation and other globalist corporations.

The Canadian arrest in December, 2018 of Ms. Meng Wanzhou, Deputy chairwoman and CFO of Huawei, who is facing extradition to the U.S.A. for stealing trade secrets, and obstructing a criminal investigation, represents the reach of the U.S. government. The Canadian Justice Minister will make the final decision as to whether or not Meng Wanzhou will be extradited. The Chinese government has retaliated by arresting two Canadians for espionage (former diplomat Michael Kovrig and the businessman Michael Spavor), and it has restricted imports of pork, canola oil and other Canadian products.

The establishment political system is so corrupt and entrenched that it is allowing the Government to Canada to be hijacked by corporate and Chinese Government interests, and at the expense of the Canadian people. It is so bad the U.S. government had to add an out clause to the recent U.S. Canada Mexico Trade deal (CUSMA) that if one of the countries signs a free trade with a non-market country, that the two other countries have the right to leave the trade deal.

This inclusion is implicitly referring to a free trade deal between Canada and China. In addition, the U.S. government felt the need to notify the Government of Canada that allowing Huawei technology will pose a national security threat, and the Government of Canada is still undecided on its deployment, which shows the corrupt ties of the LibCon Establishment to China.

Apparently, Canada’s telecommunication oligarchy says they will not use Huawei technology, but NCA does not believe anything they say.

So when you hear people attacking Trudeau for his ties to China, remember it’s the LibCon Establishment that is heavily invested and influenced by China and to detriment of the Canadian people.

National Citizens Alliance as a registered federal political party, stand in full opposition to the entrenched, corruption in Ottawa.