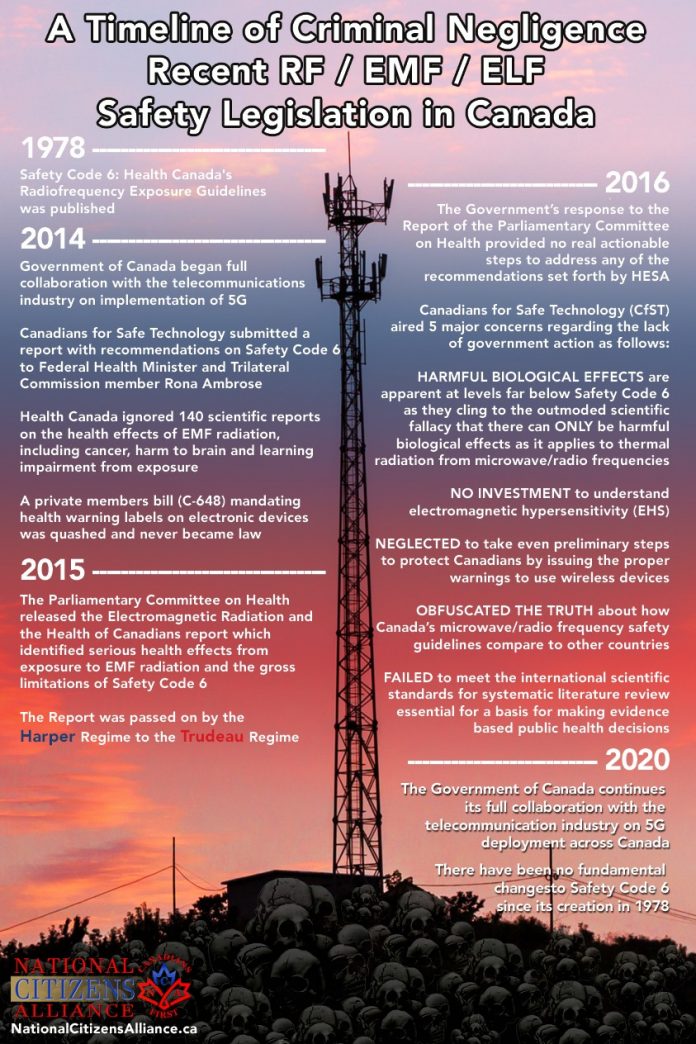 July 15, 2014 Canadians for Safe Technology submitted a report with recommendations on Safety Code 6 to Rona Ambrose, current Health Minister at the time. A summary of the report attached shows that Health Canada ignored 140 scientific reports on the health effects of EMF radiation, including cancer, harm to brain, learning impairment from exposure to EMF radiation.

Rona Ambrose, a member to the Trilateral Commission, ignored the findings of the report.

The Bill was squashed by the Harper Regime, which had a majority. Never become law.

June 2015 Report of the Parliamentary Committee on Health: Radiofrequency Electromagnetic Radiation Radiation and the Health of Canadians

This report identified serious health effects from exposure to the EMF radiation and gross limitations of Safety Code 6. See the attachment showing the key findings of the report.

The Report was passed on by the Harper Regime to the Trudeau Regime. Safety Code 6, which was created in 1979 remains unchanged: ignores the dangerous non-thermal health effects of EMF radiation and through Safety Code 6 set thermal effects outrageously high 10,000,000 (uW/m2) (3-6 million times too high according to the BioInitiative 2012) to protect the telecommunication industry from liability.

October 6, 2016, The Minister of Health, Jane Philpott, delivered the Government’s response to the Report of the Parliamentary Committee on Health: Radiofrequency Electromagnetic Radiation Radiation and the Health of Canadians

“The response was brief, repeated the same false responses we have been hearing from Health Canada for the past 4 years, and provided no real actionable steps to address any of the recommendations set forth by HESA.

Canadians for Safe Technology’s major concerns with Minister Philpott’s reply are the following:

“1. – dismissed the large body of credible evidence that there are harmful biological effects at levels below Safety Code 6 (2015). The statement “It is Health Canada’s position that there are no established adverse health effects at levels below the limits outlined in Safety Code 6” is ill founded and is not based on the body of science based evidence publicly available. By clinging to the outmoded scientific belief that there can only be harmful biological effects when there is warming from microwave/radiofrequency radiation from wireless devices, Health Canada, with Minister Philpott’s oversight, is failing to protect the health of Canadians.
2. – refused to invest the resources to understand electromagnetic hypersensitivity (EHS) better, consequently turning its back on Canadians being made ill by wireless radiation. Estimates are that at least 3% of Canadians are affected, some debilitated, by EHS. This compares to 2% of the population who are estimated to have a peanut allergy. The loss to our economy and burden to the health care system and heartbreak are enormous.
3. – neglected to take even preliminary steps to protect Canadians by issuing the proper warnings to use wireless devices more safely and by not working with Innovation, Science and Economic Development Canada (regulator for wireless devices) to direct the wireless industry to make more visible the safety instructions that come with devices such as cell phones and baby monitors.4
4. – obfuscated the truth about how Canada’s microwave/radiofrequency safety guidelines compare to other countries. We do not have “among the safest guidelines in the world”. China, Italy, Russia and Switzerland have standards that are 100 times lower (safer).
5. – failed to meet the international scientific standards for systematic literature review essential for a basis for making evidence based public health decisions.”

May, 2020 the Government of Canada is in full collaboration with the telecommunication industry on 5G deployment across Canada.

As you can see from the recent political history, the LibCon Establishment is criminally negligent when it comes to EMF Radiation and the health of the Canadian people

Any petitions to the government are a complete waste of time.

All the sell outs in Ottawa need to be removed.

National Citizens Alliance as a registered federal party is a vehicle to fight what the LibCon Establishment is doing to the Canadian people and future generations. The only way to effectively fight this issue is take the power away from those who are harming us. Every MP seat in Ottawa is a source of power. We need to take that power.

So if you care about the 5G issue, sign up to NCA today:

If you can’t be actively involved then please donate: 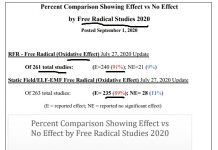