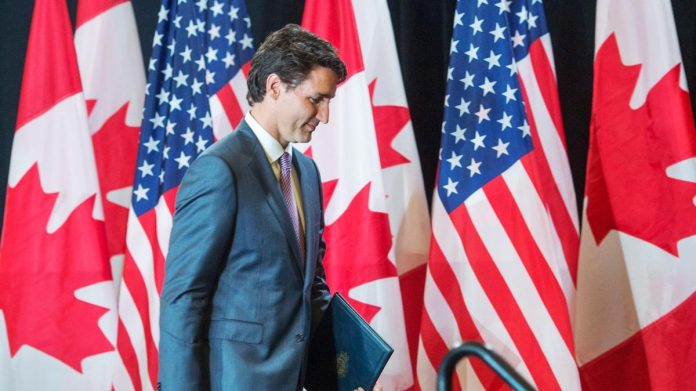 Just as Canadian Maurice Strong was instrumental in the formation of the United Nations in conjunction with the Rockefeller Council on Foreign Relations/Trilateral Commission in the U.S., Canadian mainstream politicians were pioneers in the creation of worldwide Globalism.

If you still think that there is any truth to the notion that Canada’s mainstream political parties are actually in opposition to one another you really need to dive deeper into Canadian political history and connect the dots.

Canada’s foray into Globalism commenced in 1955 at a United Nations meeting with Paul Martin, Sr., the head of Canada’s delegation. Martin was determined to convince the UN that it needed to expand in an effort to exert more control over world finance. And young Paul Jr. was there in the cheering section.

Almost 40 years later, Canada’s then Minister of Finance Paul Martin Jr. (elected as a Liberal Member of Parliament in 1988, served as Minister of Finance (1993–2002) under Prime Minister Jean Chrétien, succeeded Chrétien as Prime Minister and Liberal Party leader in 2003, but resigned in 2006 after losing the federal election to Stephen Harper’s Conservative Party) created the G20 which included Argentina, Australia, Brazil, Canada, China, the European Union, France, Germany, India, Indonesia, Italy, Japan, Mexico, Russia, Saudi Arabia, South Africa, South Korea, Turkey, the United Kingdom and the United States, which represent about two-thirds of the world’s population and account for 85 percent of global GDP. The G20 is affiliated with the G7, World Trade Organization and (of course!) the United Nations.

“The G7 and the G20 were created when the world recognized globalization as a fact of life and essentially said, what we’ve got to do is to make it work for everyone,” Martin said in an interview with CIGI, “The Centre for International Governance Innovation” in November 2018.

It’s quite obvious that Martin’s “world” does not include the people of Canada, who were never consulted, neither does it include the populations of the other countries involved in this financial/trade collusion that has seen growing amounts of wealth accruing in the pockets of fewer and fewer people: “‘An Economy for the 99 percent’ reveals how big business and the super-rich are fuelling the inequality crisis.  It shows how, in order to maximize returns to their wealthy shareholders, big corporations are dodging taxes, driving down wages for their workers and the prices paid to producers, and investing less in their business.” (Source: https://www.oxfam.org/en/pressroom/pressreleases/2017-01-16/just-8-men-own-same-wealth-half-world)

The notion that Globalization should work “for everyone” has a very short list of who that actually is. And who amongst us remembers electing anyone to a body that purports to be running an organization for “International Governance”, let alone the United Nations?

Critics of Globalism have consistently warned that it increasingly shifts the tax burden from Corporations onto individuals while increasing unemployment and decreasing wages.

With Globalization, goods can often be obtained cheaply from elsewhere (think China) making local industries not only uncompetitive but dependant. However if a major supply problem or financial crisis occurs, it will have a domino effect on every other jurisdiction in the global chain.

This cannot happen to countries that are independent and self-sufficient.

The following video shows Paul Martin Jr. and his then U.S. counterpart congratulating themselves on their Globalist achievements.

All one needs to do is look up the current rogue’s gallery of Globalists on the Canadian Privy Council to find that Paul Martin Jr. and Stephen Harper are still very much involved in catering to Globalist trade deals such as the Trans-Pacific Partnership (T.P.P.)at the present time. The above clip is from November 2018.

In the meantime, the mainstream media has been doing an even poorer job of exposing the foibles of the Globalist agenda or how it is rampant in both Liberal and Conservative mainstream political parties. It also seems to repeatedly miss the fact that there is no longer any real Opposition between these Globalist parties and they are working together to further the UN Agendas. The notion that there is any difference between them is nothing but political theatre.

And those same mainstream parties and their controlled media are being very careful to avoid talking about how Globalism is responsible for the growing wave of Populism/Nationalism as a logical backlash against it.

One of the articles referenced here is “Can the G20 Save Globalism’s Waning Reputation?” (https://www.cigionline.org/articles/can-g20-save-globalizations-waning-reputation) in which Martin is worried the G20 is now “meet(ing) in the shadow of rising populist sentiment, an unpredictable US president, tariff wars and technological disruption.”

What’s “unpredictable” about Donald Trump is that he is certainly no Globalist after refusing to go along with the Paris Climate Agreement, the UN Migration Compact, UN Agenda 21 or 2030 or the T.P.P.

In the meantime most of Europe is awash in Populist movements that are rejecting the EU and its Globalist reach.

The Canadian status quo is going out of its way to attempt to discredit or censor any political movement that is truly Populist/Nationalist in nature. That is why it is vitally important for Canadians to support National Citizens Alliance as the ONLY uncontrolled opposition to the UN/Globalist Agenda in Canada. Do not be fooled by the pretenses of established political parties or career politicians that they represent Canadians at a grassroots level: they’re astroturfers trying to distract you from the real deal.