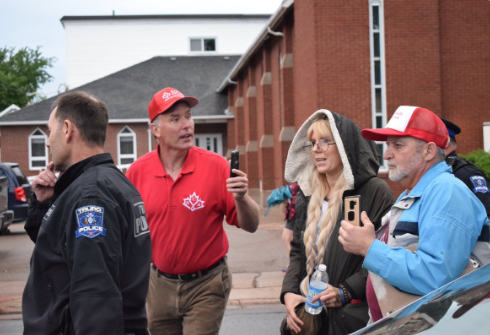 Ok let me get this right: they claim NCA is alt-right and I am a white supremacist. Where is the evidence? Are there any facts to back this up? The NCA party and I categorically condemn racism and supremacy (all forms!)… My commentary appears in [ ]

Please note this article is based on a twenty minute phone interview that was done under false pretences. The writer, Andrea Gunn, said she was doing articles on the federal candidates running in the Atlantic region. By all means contact Andrea to let her know what you think: agunn@herald.ca

[NCA is a registered federal party with a Canadians First Agenda. The NCA identifies as true Canadian populism/nationalism.]

“Despite living in Calgary, where the self-proclaimed populist National Citizens Alliance is headquartered, leader Stephen Garvey is running in the upcoming federal election in the Nova Scotia riding of Cumberland-Colchester. Five of the party’s 11 announced candidates are running in the Maritimes.” [I am relocating to the Maritimes in early September, no mention of this fact, and that regardless of where we reside, we are all Canadians and major federal issues facing the Canadian people apply coast to coast.]

“Garvey’s policies are decidedly anti-immigrant, and he speaks extensively about the need to preserve Canada’s “European heritage.” [The policies are NCA. What policies are anti-immigrant specifically? NCA’s reduced immigration is for economic, environmental, and societal reasons. This reduction has nothing to do with immigrants themselves, and in fact many immigrants in Canada agree with the NCA’s immigration plan for Canada.]

“In blog posts, Garvey warns that “sustained immigration” is causing the replacement of white Canadians with “Third World” immigrants. His platform calls for a change of the Canadian Charter of Rights andFreedoms to include the preservation of European-Canadian heritage. [NCA refers to sustained mass immigration, not sustained immigration. Deliberate deletion of “mass”? The demographic replacement of traditional Canadians through third world migration into Canada is a demographic fact supported by Dr. Kaufman and other academics. The NCA supports amendments to the Canadian Charter to deal with deficiencies in it, and the NCA supports the promotion and enhancement of Canada’s traditional identities, cultures, heritages, and values.]

“But in speaking with SaltWire, Garvey categorically denied being a white supremacist and blamed his reputation as such on a “cultural-Marxist” smear campaign. [NCA categorically condemns all racism and supremacy and has zero tolerance for it in NCA and Canadian society as a whole.]

“We believe in Canadian sovereignty, national citizenship. We believe in working with other countries, but we don’t believe in selling out the country to globalist economic interests,” he said.

“When asked, Garvey didn’t offer a straight answer about why he chose to run in Nova Scotia, except to say he has many friends in the region.” [NCA does not disclose the details of its strategic decision-making.]

“At the same time, Garvey said he can’t find anyone in the region who will rent him a conference room, and he plans to file a human rights complaint about it. Garvey also made headlines last spring when he was met with significant resistance after bringing his message to the Annapolis Valley Apple Blossom Festival.” [The NCA and I are being denied venues in the Truro and Halifax areas. There was no resistance at the Annapolis Valley Blossom Festival. NCA was given a lifetime ban two years ago by the Festival Board that has direct ties to the Liberal Party of Canada, and this year NCA was banned by the same Board. So much for freedom of speech.]

“This, according to Dalhousie political sociologist Howard Ramos, is a significant point — the voices of the alt-right may be loud, but it doesn’t mean Atlantic Canadians agree.” [No evidence is provided that NCA is alt-right, or even an explanation as to what alt-right is.]

“Certainly there have been groups trying to mobilize. But when you look at some of the realities that have tried to occur in places like Halifax, you see far more anti-racist (support) show up than people who support these fringe groups,” he said. “If you look at polls, we’re a region that’s disproportionately open to immigrants and newcomers.” [No evidence is provided that Nova Scotia region is more open to immigrants and newcomers than not. NCA believes that most Canadians want reduced immigration.]

“While Ramos said it’s important to track these groups, and for media to report on them, it’s also crucial not to spread their messaging or provide the illusion that their views are more mainstream than they are.” [Here Ramos advocates more political censorship. So much for being non-partisan as an apparent academic. Instead he conforms to the status quo and spread of misinformation and hate. Another academic on the take through research grants?]

“Our region has grappled with racism and there are issues of racism that are systemic and institutional that still need to be addressed and challenged, there’s a lot more work for us to do. But… in a world that has increasingly become more open to these views, it’s important to share the story that at least in this region, it seems that the majority is not moving there.” [It is important to focus on all racism and supremacy, not just from one group. Also, it is important to have an open and honest dialogue about immigration, rather than intoxicate it with name calling and unsubstantiated claims.]

The Anti-Hate Network is a Propaganda Mill

Are you ready to be a National Citizens Alliance Candidate?