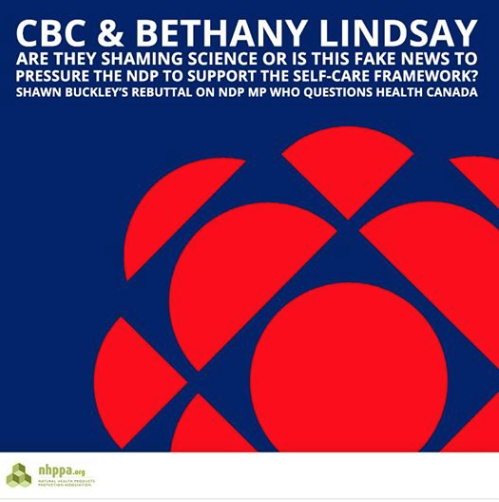 The CBC published a story on July 15, 2019 called “Federal NDP health critic pushes back on plans to require more evidence for health claims of natural products.” The article can be found at https://www.cbc.ca/news/canada/british-columbia/federal-ndp-natural-health-product-regulations-1.5212786

I read the article as critical of NDP health critic Don Davies for daring to question Health Canada’s plan to require natural health products have the same evidence that is mandatory for chemical drugs. The article left me with the impression that no one should dare question the idea that we need “scientific” evidence to support claims for natural products, that we need the same standards of evidence as we require for chemical drugs.

It is hard for the public to resist the suggestion that we need ever-stricter evidence requirements, that we need “scientific” evidence. Indeed, this suggestion seems so obvious that, ironically, it is easy to use science as a weapon instead of a tool to pursue the truth. It is for this reason that I am concerned.

Truth is the first casualty when science is used as a weapon.

As a lawyer who has spent decades involved with Health Canada I am of the opinion that our chemical drug approval process is a large fraud perpetrated on the Canadian Public.

It is not just the number of trials allowed that is a problem. There is also a “science” to designing trials to get the results the pharmaceutical company wants. Books are written on how companies unfairly design clinical trials to get the result they want. A good summary of some literature on this topic is Drug Companies & Doctors: A Story of Corruption, Marcia Angell, The New York Review of Books, January 15, 2009 Issue. After outlining several ways that clinical trials are manipulated, Dr. Angell writes:

The problems I’ve discussed are not limited to psychiatry, although they reach their most florid form there. Similar conflicts of interest and biases exist in virtually every field of medicine, particularly those that rely heavily on drugs or devices. It is simply no longer possible to believe much of the clinical research that is published, or to rely on the judgement of trusted physicians or authoritative medical guidelines.

I take no pleasure in this conclusion, which I reached slowly and reluctantly over my two decades as an editor of The New England Journal of Medicine.

To complicate matters, the clinical research that is given to Health Canada is kept secret as confidential business information. As the recent case of R. v. Doshi, 2018 FC 710 makes clear, Health Canada will not share clinical trial evidence without Court intervention.

This drug approval fraud would be very easy to fix. Rather than have a drug company design and run the clinical trials, Health Canada should hire two independent groups, publish the trial design before the trials so that it is clear the designs are fair, and then run the trials. All trial information would be public. This would protect health and safety by ensuring that only chemical drugs that are safe, and work, are approved.

This rational approach would, however, undermine the main purpose of our drug laws – to protect intellectual property rights.

Understanding that our drug approval process is seriously flawed, I am at a complete loss as to how the CBC and Ms. Lindsay could be critical of anyone for not wanting it to be applied to natural products. If public health was an issue, one would expect the CBC to be critical of our chemical drug model.

This story also lacked any reporting on the differences between natural and chemical drugs in order to effectively address whether the same standards of evidence should apply. For example, the Standing Committee on Health held what I was told were the broadest consultations of any standing committee in Canadian history into this issue. These consultations resulted in a clear recommendation that the chemical evidence standards should not be applied to natural products (see Natural Health Products: A New Vision). Both the Government and Health Canada accepted that recommendation which led, after further expert panels, to our current Natural Health Product Regulations.

Nor is there any discussion of why this is now an issue. An Access to Information request, the results of which have been published by the NHPPA in this Discussion Paper: Origin of the Self-Care Framework, reveals that there is no regulatory problem with the current regulation of natural health products. There is no evidence that the current approach is in any way failing to protect Canadians. The proposed changes, including imposing the chemical drug standards of evidence on natural products, came out of the blue by four bureaucrats.

Of greater concern, is that there seems to be a complete lack of understanding of the consequences of adopting the Self-Care Framework, including imposing the chemical drug standards of evidence on natural products. Presently it is functionally illegal to treat any serious health condition in Canada with a product that did not have patent protection when it went through the costly new drug approval process. I say it is “functionally illegal” because it is the deliberate result of our drug policy. The process to get approval for serious health conditions is so prohibitively expensive, that only products with patent protection go through it. Products without patent protection could never recover the cost of the process because anyone could copy their product. The effect of this is that the only “approved”treatments for serious health conditions are chemical drugs. It is of course unlawful to use an unapproved treatment for any condition.

A major change that will slowly occur under the Self-Care Framework is that it will become “functionally illegal” to treat anything but the most minor of health conditions with anything that did not have patent protection at the time it was approved by Health Canada. This will occur largely because of the change of imposing the chemical drug evidence standards on natural products.

Canadians should know that there is a personal freedom issue that has been lost on the CBC.

If the Self-Care Framework is implemented, it will be illegal for anyone to sell you a natural product to treat anything but the most minor of health conditions. Even if all of the “approved” chemical drugs do not work for you, you will not have the freedom to choose anything else. Shouldn’t consenting adults have the right to choose whatever treatment they want, as long as they are fully informed? We are either free human beings, or we are farm animals where the farmer (Health Canada) has the sole say as to what treatments we receive.

If we proceed and make it illegal to treat anything but the most minor health conditions with natural products, this means that almost all health conditions will be treated with chemical drugs. Will this lead to better health outcomes? This is the most important question. It is also the question that is being ignored. Chemical drugs taken as prescribed or directed are one of the leading causes of death. Chemical drugs taken as prescribed or directed cause a large number of severe side-effects short of death. Before forcing people into the chemical drug model, should we not assess whether this will lead to better health outcomes?

Why are we changing our drug regulations without assessing whether we will have better or worse health outcomes with the new model?

Why are we changing our drug regulations without assessing whether it is appropriate to change our current social structure where a person can choose between chemical and non-chemical treatments?

What happened to “my body, my choice”?

There is always room to improve on drug regulation and policy. However, if we are going to arrive at the best health outcomes, “science” cannot be used as a weapon to bludgeon anyone in this dialogue. Health regulation is complicated and interacts with various areas: science, human rights, tradition, and belief. We have much to be excited about and much to discuss. I have only touched on some of the issues that came to mind when I read the CBC article.

It may be that I read the article as being more critical than it was. Frankly, I read it as an attempt to browbeat a party into supporting the Self-Care Framework. That may not have been the intention, but I truly hope going forward that there is less sensationalism and more consideration of the bigger picture.

Republished with permission from the Natural Health Products Protection Association